George Washington Kawaihoolana Lincoln
﻿George Washington Kawaihoolana Lincoln (GW) was the first born son of Lorenzo Lincoln and his wife Kaaia Kuawalu. He was born  December 15, 1839, on his father’s ranch in Keawewai  (Kawaihae-uka) S Kohala, Hawaii. The Lincoln and Bell families were “neighbors” and GW became interested in the Bell daughters, Rebecca “Lepeka”, born in 1842, and later Mary Ann “Meleana”, born in 1850. Some of the interest may have been sparked by the possibility of access to some of the Bell property, as the father (William P Bell Sr) died about a year before GW married Rebecca and GW promptly inserted himself into the Mahele Application process for the Bell property. It is suspected that his father had a “falling” out with GW, perhaps all four sons, prior to 1858; hence his offer of one half ownership to half- brother  Nedabiah III in his 1858 letter. This family split may have increased GW’s interest in the Bell property and marrying a daughter would have been very convenient.
Rebecca Bell and GW were married June 2, 1856 in N Kohala. (The Lincoln property was in S Kohala and the Bell property was a few miles north in N Kohala.) Over the next 20 plus years (1857 - 1879), Rebecca and GW had at least 10 children (according to the 1890 Hawaiian census). Eight have been identified; Ned Edward “Neki” b February 27, 1857, William George b April 29, 1858, Caroline nui (nui meaning from the first family) b October 21, 1859, James possibly born about 1861, Rebecca “Becky” nui b August 8, 1863, John George b July 11, 1864, Hannah “Hana” nui b about 1869 and George Kawaihoolana b March 9, 1879. The three daughters carried the nui modifier as they each had half- sisters with the same name.
The last four known children (born after 1862) have birthplace records indicating they were not born on the Lincoln ranch; rather locations further north and implying they were born on the Bell property.  This coincides with GW’s known interest in his wife’s share of the 300 acre Bell property. If the family had relocated to the Bell property (GW still owned most of the original Lincoln ranch) this would have placed him in close proximity to Rebecca’s younger sister Mary Ann. By 1868, possibly earlier, GW began a relationship with Mary Ann (they were not married) that resulted in seven known children.  (At the time of the 1890 Hawaiian census, Mary Ann was reported as having had 11 children with 5 still being alive. Since her last known child, son Kawaihoolana George, was not born until 1891, the likely total becomes 12 births with 7 children living to adulthood.)  They were Lawrence Bell Lincoln b April 29, 1869, Caroline Bell Lincoln b July 21, 1872, Kipikane “Mary” Bell Lincoln b December 15, 1877, Rebecca “Becky” Bell Lincoln b August 8, 1882, Hannah Bell Lincoln b February 14, 1885, Alice Bell Lincoln b June 10, 1888 and Kawaihoolana Bell Lincoln b October 7, 1891. The five oldest   have birth place records that indicate they were born on the Bell property, the two youngest, inconclusive.
Several law suits provide background details that are not available via more traditional records. One of the most important suits is the divorce record of 1896, when Rebecca sued to divorce GW. As a result of it being contested, and involving support issues, it is a lengthy document with considerable information relating to family issues.  The picture depicted of GW was far from flattering. Rebecca was granted her divorce.
Subsequent to the divorce, GW married Kaohe Kalopi November 14, 1905 in Kawaihae-Uka. She was born about 1870 and had been previously married.
In early 1910, GW sold his remaining interest in Lorenzo's ranch to William M S Lindsey Sr (see picture below). After the sale, GW and Kahoe relocated in Kailua-Kona and were listed there in the June 1910 US Census. He died there January 1, 1912. Kahoe remarried and was alive as of the 1920 US census.
﻿ 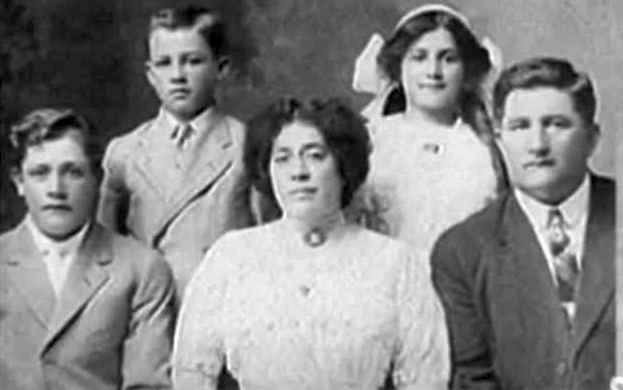