Rebecca Bell
Rebecca Bell was born about 1842 in Waimea, Hawaii. She was the second child and first daughter of William Peter Bell (of Scotland) and Kipikane Kihei. William and Kipikane had 6 children - William “Wilama” Jr, Rebecca “Lepeka”, George “Keoke”, Mary Ann “Meleana” or “Ma”, John “Kione” and Henry.
William Bell Sr died, intestate, in 1855. Probate divided his estate into equal 1/6ths for the children, (where does the widow fit in?) and a Mr Swinton was appointed guardian for the minor children (he adopted one).  The physical division was unresolved for several decades and created ill will and law suits.
William Bell’s neighbor, GW Lincoln, became involved and worked with the survey party that was part of the Mehele application for the Bell property, which was an obvious indication of his interest in the land.  The property was assigned the number of 1995. Various records report this as a Kul (Land Commission Award, or commoner’s number) or a RP (Royal Patent). Privy Council minutes refer to the grant as a Royal Patent. Shortly after the survey, GW married (June 2, 1856) Rebecca, an interesting coincidence.  As mentioned in the segment about GW, they had 10 known children, 8 of whom have been identified.
In the December 1890 Hawaiian Census, GW was living in S Kohala. The family consisted of:
GW, age 51
Rebecca, age 46 and the mother of 10 children with 7 still alive
Carrylaina, age 17 (Caroline Bell Lincoln, daughter of MaryAnn Bell)
Kawai, age 11 (George Kawaihoolana Lincoln, son of GW and Rebecca)
Beke, age 7 (Rebecca Bell Lincoln, daughter of MaryAnn Bell)
Keoha age 4 (most likely Elizabeth Keohokaleleona-Lani Lincoln, granddaughter of GW and Rebecca )
George Jr (Lawrence Bell Lincoln), age 21 (eldest child of MaryAnn Bell)
Abikala (Lawrence’s wife, Abigail Mana), age 18
Maikui (Lawrence and Abigail’s daughter Sarah), age 2 months
Samuela Awaa (son of GW’s brother William) age 17.
It is assumed that, at this time, Mary Ann Bell was living on the Bell property in Kehena, probably with her youngest two daughters. Her last child, Kawaihoolana Bell Lincoln was not born until October 7, 1891.
In 1896, Rebecca sued for divorce. Her reason was extreme cruelty and habitual intemperance. This divorce was contested and involved a support payment. As a result there was considerable testimony of friends, neighbors and relatives, including their eldest son Ned. The total file amounts to several dozen pages and provides considerable family background not normally available. The divorce was granted later in the year.
Rebecca has not been found in the 1900 US census. She died April 16, 1910 shortly before the May 1910 US Census. She is one of several family members reported to have been buried in the Lincoln Family Cemetery in Kaapau, N Kohala. 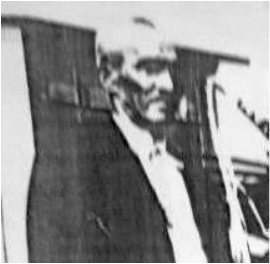